A structure is an assembly of components which are fastened together through some type of connection. If connections are not designed properly and fabricated with care, there may be a source of weakness in the finished structure, not only in their structural action but also because they may be the focus of corrosion and aesthetically unpleasing. The design of main members has reached an advanced stage, based upon theories which have been developed and refined, the behaviour of connections is often so complex that theoretical considerations are of little use in practical design. The connections are a jumble of local effects. Most connections with the distribution of stress are highly indeterminate depending upon the deformation of fasteners and the detailed material. Local restraints may prevent the deformation necessary for desirable stress redistribution. Following are the requirements of a good connection in steelwork: 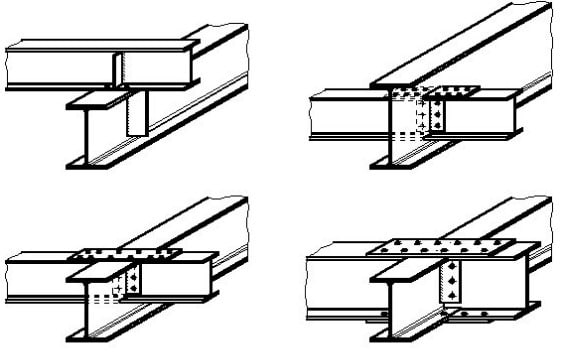 The following are the common types of connections used for structural steelwork;

Rivets, bolts and welds are used extensively, and frequently the economic advantage of one over the other two is so small to be uncertain. However, riveting has been superseded in importance by welding and high-strength bolting. Riveting is joining of structural steel components by inserting ductile metal pins, called rivets, into holes of the components to be connected from coming apart. A rivet consists of

(i) a shank of given length and diameter

(ii) ahead known as manufactured head.

The size of the rivet is defined by the diameter of the shank. Riveting is essentially a forging process during which a hot rivet is driven in its plastic state and ahead is formed at the other end. The head so formed at the other end of the rivet with the help of a riveting hammer and a buckling bar is known as driven head. Rivets driven in the field during the erection of a structure are known as field rivets. Rivets driven in the fabricating shop are known as shop rivets. Both these types are known as hot driven rivets since the rivets are heated to a temperature ranging between 1000o F to 1950o F before driving. Field rivets are driven by a hand-operated pneumatic riveting hammer, while the shop rivets are driven by “bull” riveter. Some rivets are driven at atmospheric temperature. They are known as cold driven rivets which are squeezed or driven to fill the holes and to form the heads by application of large pressure.